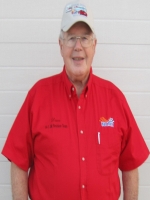 Biography
Once upon a time early in Dave’s professional career, he was a traveling salesman. He drove not only all over Texas but the other States in his territory. During his many road trips, he never passed up stopping at a junk yard in search of “rare and desirable” Corvette parts. This allowed Dave to acquire a huge stash of 1957 Corvette parts. Including several wrecked 1957 Corvettes. One of which was an original Air Box Corvette. He also found the rear end of another Air Box Corvette which was very unusual, because it was equipped with a power top unit.

In 1984, he organized the first Texas Chapter Judging meeting at the Grapevine Dallas Fort Worth Hilton Hotel.

Over the years, since the Texas Chapter formation, Dave held every office in the Chapter at least once.

He also played major roles, when the Texas Chapter hosted the 2001 Convention in Galveston and the 2006 and 2017 San Antonio Conventions.

Dave was famous for “approving” the meals for the Texas Chapter Regionals and Conventions. He also was known for his signature chocolate cake dessert. Dave contributed the table decorations for the Lone Star Regionals and the San Antonio NCRS Conventions.

Dave owned many Corvettes over the years including; a 1963 Air Coupe, a 1973 5 Star Bowtie and a 1957 Duntov Fuel Injection roadster. He also restored his 1957 Air Box and his 1957 resto rod Corvette earned the first Texas Chapter Regional Concours Judging Award at the 2017 Lone Star Regional.

In 2007, Dave hauled his 1957 FI Duntov Corvette to Cumberland, Maryland, where he joined up with the Convention Road Tour to the 2007 NCRS Convention in Marlborough, Massachusetts. The Road Tour took scenic roads through the back country of Pennsylvania And over many covered bridges. After passing over several, Dave was quoted as saying; “if you’ve seen one covered bridge, you’ve seen them all”.

Dave was active not just in the Texas chapter, but also the NCRS. He was a significant contributor to multiple updates of the 1956-57 Judging Manual.

During his NCRS judging career, he earned a Red Hat, a 4 Star Master Judge and points towards a NCRS 5 Star Judges award.

Outside of the NCRS, Dave was involved in Rusty’s Morningstar Ranch. A charity for adults with autism where he served as Rusty’s Board Vice President.

Dave’s devotion and dedication to the Texas Chapter and NCRS will be sorely missed.