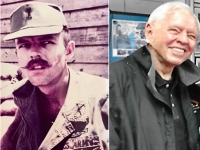 Biography
Ralph was ‘car guy” long before he could legally drive. He bought his first Corvette at around age 20 which he drove daily, raced it on weekends. In 1961 Ralph with his 58 Corvette achieved an SCTA land speed record of 142.40 MPH at California’s El Mirage Dry Lakes standing mile and a record of 126 MPH in the half mile.
While at San Jose State he received a master’s degree in Business & Industrial Management. At school he met his “one & only” wife Diane Butler.  Diane was attracted to Ralph because of the 1956 Corvette that he drove at the time.
Ralph was drafted into the United States Army in 1966 and went to Officers Candidate School at Fort Benning, GA.  He shipped over to Viet Nam as a Second Lieutenant in 1967, then was promoted to 1st Lieutenant and 1st platoon leader. Ralph later served as a battalion staff officer in the DMZ, He received a Purple Heart for combat injuries and a Bronze Star for Valor, plus various other awards for his service to our country. He was released from the Army in 1970.
In the early 1970’s he worked in the motorcycle parts industry, then became a commercial real estate broker. He and a long-time friend owned a successful Stuft Pizza restaurant for 22 years.
He enjoyed lots of cars but did not get another Corvette until the early 2000’s when he purchased a ’57 fuelie and joined NCRS and the Southern California Chapter (SCC).
Ralph was verry active in NCRS. Ralph quickly learned to judge Corvettes, obtained his 400 Masters Judging level and was the go-to guy for the C1. Along the way he managed to restore his 57 fuelie for which he received the coveted “Duntov Award”. Not satisfied with that achievement Ralph bought a 1967 A/C big block which he restored and received another “Duntov Award”.
Ralph was active in in SCC serving on the Board of Directors, as Secretary and as Technical Advisor. He also contributed time and funds for NCRS Convention events.
He is survived by Diane Haun to whom he was married for over 50 years. Ralph will be missed by all who knew him.
Ed Vignone #5815 & Don Hooper #50543