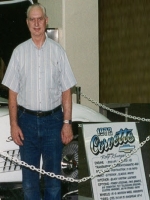 Rolf was a familiar sight at NCRS meets at the Chapter, Regional and National level.  His Restorer articles reflected his technical background and prolific research.  He was a member of the 1970-72 Manual Team.

Rolf’s research of the history of Corvettes is legendary.  He frequently went directly to engineering groups at General Motors to obtain what was thought to be “impossible to find information.”

Rolf’s lifelong love of high-performance cars inevitably led him to the Corvette, but not before a part-time job as a teenager at a garage and speed shop landed him a spot on an Indy 500 pit crew.  The “shop” went on to become Granitelli STP Racing.

More than one NCRS member who was unaware of Rolf’s professional background compared his research work as being more like that of a “Rocket Scientist” than a Corvette hobbyist.  Others knew that Rolf had used his graduate degree in aeronautical engineering to contribute to the design of the Saturn V rocket, the one that carried U.S. astronauts to the Moon.  He retired from Lockheed Martin as a Vice President.